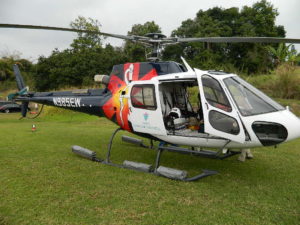 Kona Community Hospital (KCH) welcomed a new emergency medical rotor coptor as it made its maiden landing on the hospital’s helipad on Thursday, February 14.  The Hawaii Life Flight (HLF) crew manning the rotor copter was greeted by KCH administration as well as members of the KCH trauma team, emergency and security departments.

The rotor program at Kona Community Hospital, which officially became operational at 7:00 am on Friday, activated its first emergency transfer later in the morning at 10:15 am.  “This patient is being sent directly to the receiving hospital…there’s no ground transportation involved,” reported Wendi Wagner, KCH Trauma Coordinator.

HLF has been contracted to operate the American Eurocopter AS350 Be.  The rotor copter was configured for medical emergency transport prior to arrival on the Big Island.  The Thursday landing gave the HLF flight crew a chance to familiarize KCH trauma, emergency and security personnel to the new aircraft. David Steel, Rotor Chief Flight Paramedic and Mark Leggett, Medical Department Chief showed off medical equipment and other features of the rotor copter and answered questions about its capabilities.

The rotor, also referred to as an AStar rotor copter, is stationed at Kona International Airport and is dedicated to Kona Community Hospital for facility to facility patient transport.  Initially the rotor copter will fly daytime hours only from 7:00am to dark, based on the pilot’s discretion and flight turn-around time.  Soon, however, the rotor program will provide 24/7 access to emergency transfer from KCH.

The KCH trauma team will coordinate patient transfers with the Hawaii Life Flight critical care communications.  Once activated, the AStar can make the trip from the airport to KCH in eight minutes.  The flight to Maui can be made in approximately 35 minutes. Additionally, it will cut transit time down from four hours it currently takes to transport a patient to Oahu, to about one hour – depending on weather conditions.

“This is a major accomplishment for Kona Community Hospital and for West Hawaii residents,” said Jay Kreuzer, KCH CEO.  “We’re now able to greatly reduce emergency transit times for patients who require transfer, which in turn will improve outcomes for those patients.”