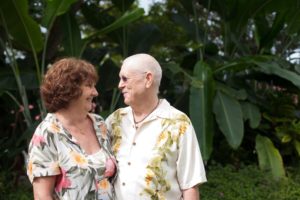 Bill Hughes remembers sitting with his wife talking to his family practice doctor about the pain he was having in his arm and stomach. They were reviewing a CT scan that was performed a few weeks earlier. His doctor was very concerned about a spot on the imaging study that led to additional diagnostic exams. “I remember thinking to myself that I had hit the trifecta of imaging procedures. In one day, I had an X-ray, MRI and Bone density scan(s).”

Bill Hughes was diagnosed with non-Hodgkin’s lymphoma. “It was a difficult time for me, I was taking a variety of pain medication and I didn’t feel like myself.” Bill traveled to California to begin his treatment where he ended up in the emergency room. “The doctors told me I almost died. I spent ten days in the hospital and I hardly remember anything from that time period.” Bill began receiving chemotherapy for his cancer.

After his second treatment of chemotherapy, Bill and his wife Darlene decided to come home to the Big Island for the remainder of his treatments. Before returning, he arranged for his cancer therapy care and treatment with Dr. Anthony DeSalvo, Medical Oncologist at Kona Community Hospital. “I will always remember the first time I met Dr. DeSalvo. He walked into the treatment room and said “you look better in person than you do on paper.” I remember telling him my story and thinking about how busy he must be. Dr. DeSalvo reassured him that he had time to listen.”

Bill was scheduled to receive four more treatments of chemotherapy. After the six treatments, his cancer was declared to be in remission. “It was a miracle! I couldn’t believe only a few months earlier I was diagnosed with cancer”. Bill was very fortunate that the non-Hodgkin’s lymphoma responded well to chemotherapy treatment.

Bill and his wife Darlene are very grateful to Dr. DeSalvo and the staff at Kona Community Hospital for their professionalism and support. “There must be a halo over the building. Everybody in Dr. DeSalvo’s clinic and Chemotherapy/Infusion clinic are angels. They took such good care of me.”

Bill credits his wife’s love and support. “If it wasn’t for her, none of this would of ever happen. She was there every step of the way.”