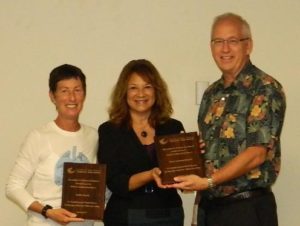 On January 9th, Kona Community and Kohala Hospitals received the Award of Community Excellence from The Coalition for a Tobacco-Free Hawaii in recognition of their recently adopted smoke and tobacco-free campus policies. Both campuses, which comprise the West Hawaii Region of Hawaii Health Systems Corporation, became smoke and tobacco-free effective January 1, 2013.

Brenda Larson, West Hawai’i Community Coordinator with the Coalition for a Tobacco-Free Hawai’i said, “The presentation of these awards recognizes both hospitals for exemplifying good health practices, and for taking positive steps to make West and North Hawaii communities healthier.”

Hospital leaders say the new policy reflects their goal to provide a healthy and safe environment and to promote a positive image of health to patients, employees, visitors and the public.

The new policy bans the use of all tobacco products, including cigarettes, cigars, pipes and smokeless tobacco, within all properties owned, leased, or occupied by Kona Community and Kohala Hospitals. This includes parking lots, hospital vehicles, and employees’ vehicles while parked on the premises. Brenda Larson and Maile Goo with the Coalition for a Tobacco-Free Hawaii present Regional CEO Jay Kreuzer with Community Excellence award.

The smoke and tobacco ban went into effect after a six month implementation period. During the transition period, a multidisciplinary committee communicated the policy change to employees, area medical providers and the public. In implementing the new tobacco ban, the hospital will continue to offer symptom relief or tobacco-cessation treatment to interested staff, visitors and patients.

Jay Kreuzer, CEO of Kona Community Hospital and the West Hawaii Region noted, “This won’t be easy, but this smoke-free initiative is key to our on-going efforts to create an excellent place to work and to receive health care. We’re committed to the health of our employees and our community.”