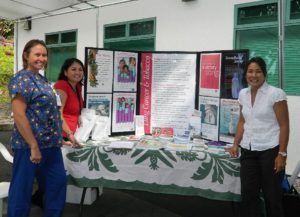 Kona Community and Kohala Hospitals launched their smoke and tobacco-free initiative last week in conjunction with the Great American Smokeout. This was an opportunity for both facilities to communicate to employees and the public that they will become smoke and tobacco-free campuses beginning January 1, 2013.

On Wednesday, November 7, Kohala Hospital recognized the Great American Smokeout with a taco bar for employees in their dining area. On Thursday, November 8, Kona Community Hospital held a picnic-style get together with cold-turkey sandwich lunches. Both events were supported by the American Cancer Society. Kaiser Permanente’s smoking cessation specialist also attended to answer employee questions.

The Great American Smokeout is held yearly to spotlight the health dangers of tobacco use and the importance of quitting smoking to improve individual health and promote better, safer communities. However, combining the kick-off of the smoke and tobacco-free campus initiative with the annual event gave employees of both hospitals a chance to learn more about the smoke-free policy and talk about the upcoming changes at each facility. Employees were

The goal of becoming tobacco and smoke-free for both Kona Community Hospital and Kohala Hospital is to raise standards for a healthier work environment and promote a positive image of health to patients, employees, visitors and the public.

According to the Department of Health’s Behavioral Risk Factor Surveillance Surveys 2009-2010, smoking, tobacco use, and exposure to tobacco smoke, are the leading cause of preventable illness and death in Hawaii and the United Sates.