Jen Davis still remembers the emptiness she felt the night her fiancé Elvis Sheppard passed away four years ago.

Davis, 39, was walking down a hallway out of Kona Community Hospital’s emergency room toward the dozens of people waiting for an update on Sheppard’s condition following his motorcycle crash.

“I just collapsed in the hallway — I’m crying in the hallway,” Davis told Big Island Now. “Then someone picked me up, we exited and I drove home.”

The grief of her fiancé’s death was compounded by a lack of resources from the hospital aimed at helping people navigate the loss of a loved one.

“It was like here’s the door, exit stage right,” Davis said.

Recognizing a need to extend their dedication of care beyond the loss of life, a group of KCH staff formed the Circle of Life Committee (COL) and put a Code Lavender in place at the facility. Code Lavender helps humanize that empty moment, as well as honor those who have passed and give support to those facing the uncertainties of grief and loss.

“(As a nurse) you have the functions of what you’re supposed to be doing, while you’re trying to read the room and be human about it,” said KCH nurse Valerie Pedrami and member of COL. “Once the patient has passed, there’s a stillness, an emptiness in a way.” 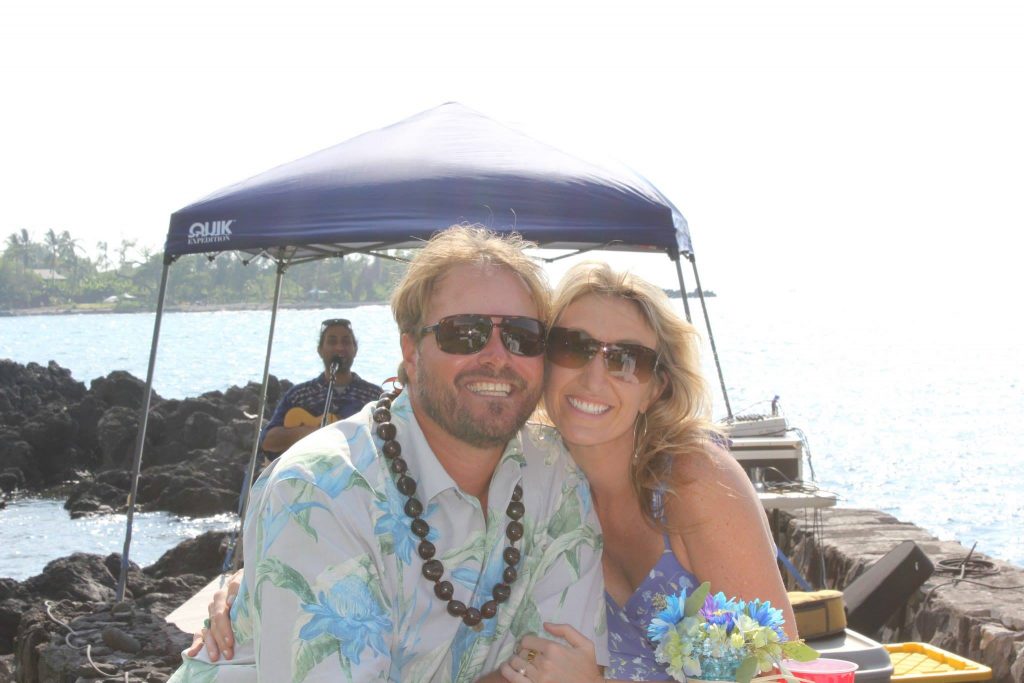 emptiness into something meaningful. The catalyst, the nurse said, were a
couple of employees who lost loved ones.

“I felt we weren’t doing enough to show we cared,” Pedrami said.
“We wanted to do more, not just for patients but for cohorts.”

Sheppard’s death — and its impact on Davis — made the need for Code Lavender even more apparent.

“I remember promising (Davis) I would make a change,” Pedrami recalled.

As an experienced critical care nurse, Pedrami can anticipate a patient’s death and mentally prepare herself.

None of it’s easy, she said, for the families or attending nurses.

COL, created in 2020, made its mission to create meaningful, respectful experiences for patients and KCH ‘ohana through education and tools relating to traumatic events, end-of-life matters and bereavement. Part of those tools was the adaption of a “Code Lavender,” developed at Santa Barbara Cottage Hospital in California, and tailored to the needs and culture at KCH. 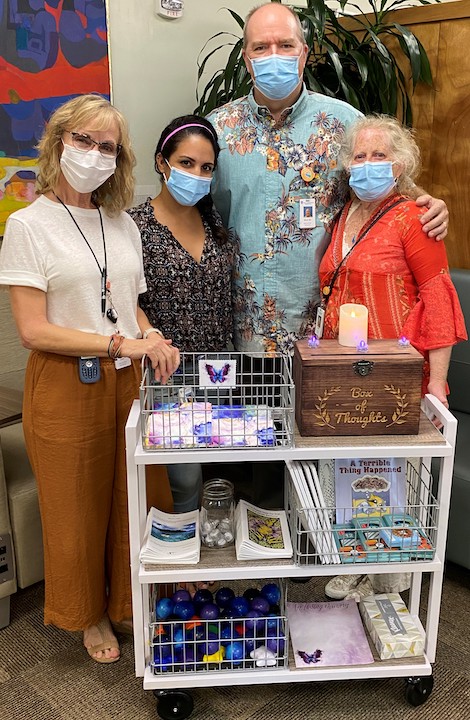 Images of purple butterflies are now posted outside the door of a dying patient’s room    ensuring people in the area act respectfully and with reverence. After a patient dies,              staff now offer a Lavender Ceremony where a nurse reads a poem memorializing the            deceased. The ceremony is voluntary.

Pedrami performed the Lavender Ceremony for the first time in May. She said she was        nervous to ask them, but her intuition spoke to her and had a feeling the family would        be receptive.

“It was rewarding for my spirit and the family to put into words that we care,” Pedrami said. “Having your moment to kind of say your peace gives you closure and humanizes the moment.”

While the hospital already had literature on grief and some resources, Pedrami said, they did an overhaul of the material, creating an end-of-life resource book. Pedrami said the booklet talks about changes families will see in their loved ones as they come near their deaths.

It’s also a resource as it provides numbers to the mortuary and information on how to get a death certificate. KCH also has a different booklet on grief and the grieving process. Materials were used from Hospice of Kona but tailored to KCH.

The committee also created debriefing champions, who are available for a debrief session three days after Code Lavender has been activated. Pedrami said the hospital does have counseling available to staff, but the debriefing champions allow for staff to address the emotional trauma at the moment. 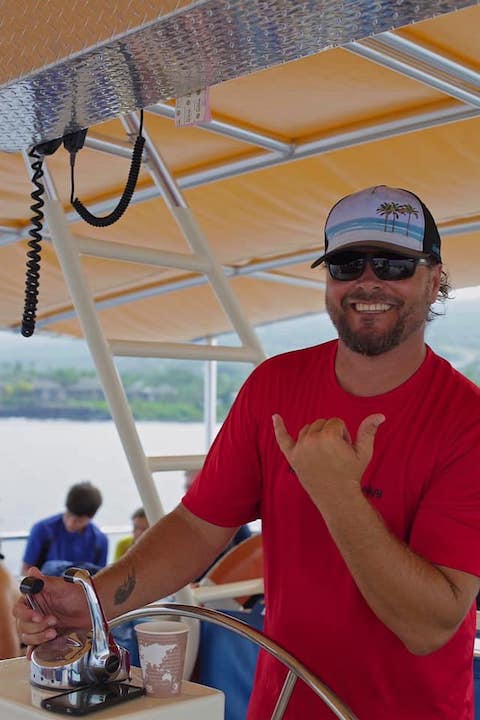 The night Sheppard died, Davis remembers having to sit down with doctors who were trying to explain to her what was going on.

“As a layperson, he was speaking a foreign language,” Davis recalled. “My body was in shock, nothing was registering to me. We were getting married in 28 days. I didn’t understand he was dying.”

After Sheppard’s death, Davis spoke to Pedrami about the lack of support and services and what needed to happen to change it.

“Val (Pedrami) is amazing. All the (KCH) nurses there are all incredible,” Davis said. “There was a need for it and this need has been addressed. It’s so touching to me that they heard me and that someone will be helped through this.”

While Pedrami and KCH staff were working on an adaptation of Code lavender, Davis found ways to support their efforts as well as honor Sheppard.

Davis along with friend and registered nurse Anne Broderson, founded the Elvis Sheppard blood drive in hopes of educating the public about the need for blood donors. It’s been held annually since 2017. In 2019, they broke the state record’s for largest collection in a single-day drive.

During the 2019 blood drive, Broderson and Davis held drawings in an effort to raise funds for the Kona Hospital Foundation’s Trauma Services. The women hoped the money collected would go toward a bereavement program.

“It’s all part of the bigger picture,” Davis said, calling the bereavement program “the best way to honor who he (Sheppard) was to all of us.” 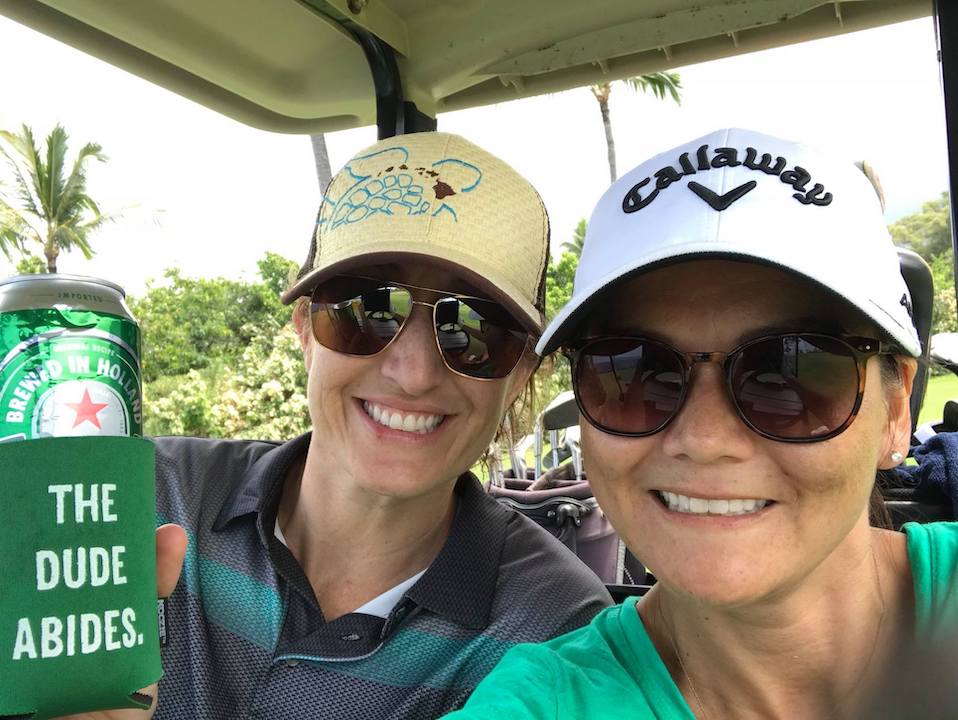 Davis and Broderson raised approximately $30,000 that went toward funding aspects of Code Lavender, including getting materials for the comfort cart.

Broderson and Davis’ vision for a bereavement program was clear. They wanted there to be more education for the staff and effective communication to create fewer problems in the future.

“Everything we were talking about, they addressed it,” Davis said. “It’s good no one will have to do this ever again. People will have help.”

Broderson, who was also friends with Sheppard, was with Davis the night he died. While there was a lot of confusion that night, Davis said, Broderson was there at her side.

A KCH nurse at the time, Broderson was off duty when Sheppard was brought in. She did what she could to help Davis understand what was happening and translated the medical jargon.

“It’s hard to take that extra time to answer questions and address all the things that come up,” Broderson said. “I was in a unique situation; I could be that person to take the extra time to serve in that role.”

Pedrami and COL gave a presentation to Davis and Broderson on Code Lavender and the additional changes to education KCH now provide. Broderson recalls being surprised how powerful the Lavender Ceremony was at providing closure.

Moving forward, both Davis and Broderson are optimistic that Code Lavender will change the experience of losing a loved one from emptiness to feeling supported.

“I think it’s cool to see the loss of someone so loved to carry over and benefit people in the future,” Broderson said. “We know Elvis would be proud of what’s been created in his memory.”